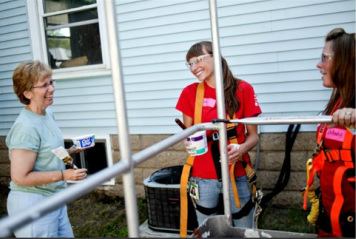 There was an unexpected knock on the door of Elona Chance’s Jerome Street home this spring. Chance answered, finding Jennifer Parks, executive director of Midland County Habitat for Humanity, who offered Chance the opportunity to
spruce up her home’s exterior as part of a larger neighborhood revitalization effort.

Chance thought of a few small projects that could be done — painting the porch, fixing the driveway apron — and applied to be part of the project.

“They really went all the way,” Chance said last week as the work wrapped up. “They painted my porch and my ramp, they put on a new door, they did my
driveway, they’re fixing my windows in the back. I’m like, ‘Oh jeez, it’s Christmas.’”

Chance said her neighborhood, centered around Carpenter Elementary School, is a nice area where people watch out for each other. She was glad to see Habitat and more than 500 volunteers work on 22 houses last week, giving the neighborhood a boost.

“A lot of us are medium to low income, and we want so much to see our homes and our properties look nice, but we just don’t have the money to do it,” Chance said of the homeowners. “To know there are people here that are willing to help us spruce up our place and better the look of our community, it’s a big shot in the arm.”

Parks took a break from leading the project to visit Chance, giving her a hug and checking out the work on her home. Parks said Habitat’s new revitalization
efforts build on the organization’s long tradition of building new homes.

“It really invigorates the residents to help each other out, improve the quality of life in the neighborhood and improve the safety of their own home as
well,” Parks said. “Through the week it’s interesting to see other neighbors who are not part of the program come out and you see them sweeping the driveway, cleaning out the gutters. It’s inspiring them to do that necessary work at their house.”

Residents Dennis and Joy Hutchinson applied to the program to freshen up their Carpenter Street home.

“We have a lot of things that needed to be done around the house for quite some time but we haven’t been able to afford to get it done because we’ve been
helping our daughter and son and grandkids to make sure they’re on their feet,” Dennis Hutchinson said.

The couple helped volunteer crews as a new roof was installed on their front porch,  their siding was scraped and painted, and their porch guardrails were
reinforced.

“After day one, just sitting in our house looking out and seeing the stuff that’s painted made us feel better,” he said. “When you look at the facelift and
weeds being taken out, it makes the whole neighborhood feel more presentable and I think it makes people feel better about themselves. The world needs a lot of that.”

Joy Hutchinson said the help was an unexpected blessing.

“We’re not wealthy people, but we used some of our money to help others and now things are kind of falling apart around us,” she said. “When they sent the
applications, I was like, ‘Why don’t we fill it out and see what happens?’ They contacted us and I was blown away. It’s just awesome how God gives back through people.”

Sandra Pearson, president and CEO of Habitat for Humanity of Michigan, chipped in during the week, grabbing a paint brush to put a fresh look on
another homeowner’s front porch. She said the revitalization efforts have become an important part of the organization’s work.

“It offers more ways to be engaged with Habitat for Humanity,” she said. “From my perspective, it really is in response to Michigan’s economy. We have a
lot of housing stock. We have a lot of people in need that already own their homes that may not be able to physically repair their homes or financially be
prepared to repair their homes.”

“Habitat for Humanity traditionally is thought of as a house building nonprofit,” she said. “You think of the wall being pushed up. But because of
partnerships like Dow, they literally shifted us into being a neighborhood revitalization movement by doing critical home repairs and cleanups with our
volunteer base.”

Dow has a long history with Habitat, becoming the organization’s first corporate sponsor and providing money, products and volunteers to affiliates
around the world.

Pearson said it was inspiring seeing teams from Dow and other community partners supporting the project.

“It’s very motivating,” she said. “It makes me want to work harder and get more people involved. With this many people working together, anything is
possible.”

Of the project’s 500 volunteers, an estimated two-thirds came from Dow. That included everyone from entry level workers to the leadership of Michigan
Operations.

“The neat thing about it is all the layers of the organization evaporate out here — we’re all equal,” Rich Wells, Dow vice president and site director for
Michigan Operations, said on Tuesday. “I’m going to take orders from people who know what they’re doing today. In the end, some family is going to have a better place to live because of the power of volunteerism.”

Dow’s involvement with Habitat dates back 29 years, with donations of money, products such as Styrofoam insulation and Great Stuff insulating foam sealant, and time, Wells said.

“It’s a way for us to give back to our community. Our communities are us. Our people live here; this is our home,” Wells said. “This is the one charitable
group where you can really get everyone engaged. They can relate to this.”

Others volunteered their time during the week, including state Rep. Kevin Cotter, R-Mount Pleasant, and members of the Midland Police Department.

Midland Police Officer Rob Booth organized the work team for the police department, recruiting 12 people to give their time during one afternoon last
week.

“It’s a way to give back to the community in a little different way,” Booth said.

“We obviously already work in the community, but it’s a chance to do something different,” he said as they took a break from working on improvements
to the former 1016 House, which is expected to be used for transitional housing by the Ten Sixteen Recovery Network.

“It was great, so we’ll have to see were it goes from here,” Block said of the volunteer effort. “I’d love to do it again and do more things like
this.”

The neighborhood project in Midland was one of three supported by Dow this year, with efforts in Bay City and Saginaw already finished.

Parks, with Habitat for Humanity, said the partnership is important.

“This is our third annual initiative and we look forward to many more years of partnership with Dow Chemical,” she said.

The effort also received support from a matching grant through the Midland Area Community Foundation. People who donate will have their money doubled, up to a total of $25,000, thanks to a matching gift.

“We’re running short on our match, so if anyone would be inspired to donate, we would appreciate that,” Parks said.

If you ask any of the homeowners involved, the investment is life changing.

“Everybody cares here,” said Chance, the homeowner on Jerome Street. “It’s amazing how this community just pulls together and cares. It doesn’t matter if
you’ve got money or you don’t, it’s all just coming together and doing what we can do.”